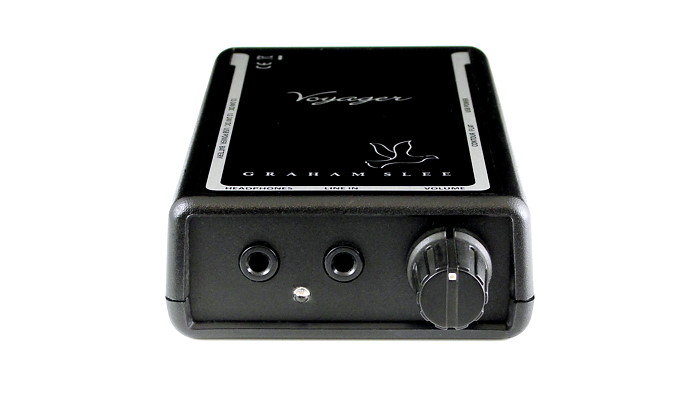 Durable For A Long Life On The Road

What makes the Voyager so popular amongst hi-fi headphone amplifiers is its wonderful big headphone-amp sound, and that it can take the knocks!

Unlike those ‘blingy looking scratch-magnet’ headphone amps, the Voyager’s rugged contruction helps it keep its appearance much longer.

Another simple but great benefit is the ease of battery replacement – its E-cell power source is available in lots of shops. Not that you’ll be replacing it all that often, as it lasts for up to 50 hours continuous playing time!

The Voyager is supplied with battery fitted (as required by the “Battery Directive”), and is also supplied with a mains power supply for non-mobile use. Plus, it can pick up its power from a 5V USB source!

We Built It Your Way

When customers asked us to make a battery-portable headphone amplifier we asked them what they wanted from it.

The number one must-have was a proper high quality rotary volume control with a proper control knob, and not an awkward to use side-wheel or those awkward up and down buttons which are either dead-slow or always over-shoot.

We obliged, and every Voyager is fitted with an Alps quality “mini-velvet” volume control. It’s hard-wearing and in a period of 8 years since its 2007 launch no one has had a scratchy volume control!

Refuel On The Fly

The next on the agenda was its power: “give us an easily replaceable battery”.

They didn’t want rechargeables, built-in or replaceable. They simply wanted a disposable battery they could dump and replace on the go – never forgoing their music.

We made it easy by designing it for a 9 volt E-cell, which you can pick up virtually anywhere.

We went a step further and made the battery last a long-long time. It’s made a lot of people very happy – some of them reporting battery life of up to 50 hours continuous playing time (as we’d tested).

The battery lasts some people so long they forget it’s got one, and we have to remind them to replace it when they complain it’s stopped working!

They also wanted as many alternative power options as we could squeeze in, so the Voyager has a DC socket for use with the supplied outboard “plug-top” power supply, enabling you to listen at home whilst saving on the battery.

Plus, we put in a voltage converter and gave it a mini-B USB socket so users can ‘borrow’ power from any 5V USB source – computer, charger, in-seat power etc (lead not included).

And for dual use as a home amp as well as on the move, we gave it two ‘sound qualities’: Straight – for the best sound from quality headphones and IEMs; and Contour – for street-wear headphones that need a little more tonal boost.

But most of all, our customers wanted something that kept its looks, because so many portable headphone amplifiers lose their attractive finishes in no time at all. The Voyager’s textured ABS case goes a long way in disguising wear and tear.

Being purely analogue, it’s easy to use with any device having a line output, and the great thing about it is you can use it with a headphone-out on your iPod, phone, laptop, tablet etc and get better results…

Because the Voyager’s line-input is such a light load, your device’s headphone output will perform better and be more like a line output, and with the music coming from the Voyager instead, you will notice a valuable improvement.

Not only that, it removes the battery drain of headphones from your device letting it go further between charges – and because the Voyager takes an easily obtainable E-cell there’s less chance of you being without your sounds.

And at the risk of sounding like we’re repeating ourselves, the Voyager’s E-cell lasts longer than you’d think.

And its sound? Like we began, it’s made to sound just like our desktop headphone amps – the only difference being it doesn’t go quite as loud… because it’s a battery-portable!