Sounds so wonderful it fully immerses you in your music

Graham Slee has put in every bit of his famous and sought after analogue audio technology making the music from this DAC as dreamy as ever. What it might lack in technical specmanship is more than made up for by the way it communicates your music with you. Isn’t that what high fidelity is all about?

Honestly, It Does What We Say

And when we say it sounds wonderful we really mean it — we won’t let you down there. We’re committed to making music come alive in your home and the Majestic pre DAC will never stand in the way of your music. It might however give you a clue as to what the rest of your system should be, because, when teamed with Graham Slee Proprius amps you’ll discover what music is really about. 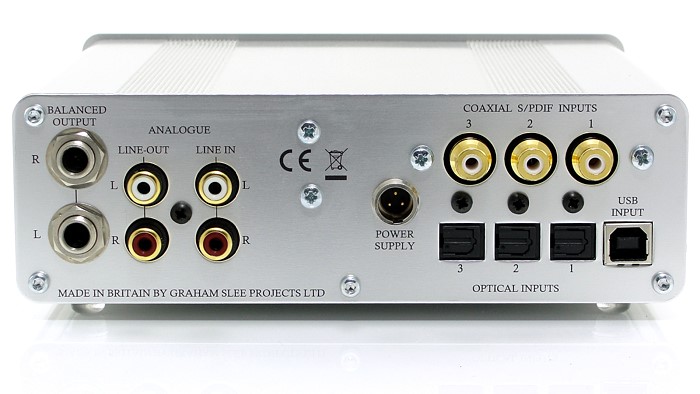 Hand made by true craftsmen in our Yorkshire workshops, the beautifully compact Majestic pre DAC is perfectly engineered to sit unobtrusively in your home and deliver great music on demand.

The Majestic USB input is suitable for CD quality FLAC and WAV files, MP3 and YouTube audio from a PC, Laptop, Android tablet or phone via an OTG adapter, and iPhone via a lightning (camera) adapter (up to 48kHz 24 bit).

It also has a stereo input for analogue audio such as the output from any of our phono preamp stages.

The Majestic pre DAC has a fixed analogue unbalanced line-out suitable for connection to a preamp, integrated amp, or any of our analogue headphone amplifiers. And to special order this output can be placed after the volume control making it variable.

It has stereo balanced main outputs which can feed any power amplifier balanced or not. Using compact TRS jack plugs, cables can be made up to suit your amplifier with a choice of lengths.

Graham Slee chose adaptive isochronous for USB because it is time sensitive, and importantly, music is time sensitive. Asynchronous simply isn’t time sensitive and data retries introduce glitches and even stop-start playback which ruins your musical interest. 48kHz, the original professional digital audio tape (DAT) sampling rate, might be classed as “old-hat” but higher resolutions suffer processing noise you won’t see declared in specifications. Resampled or upsampled 96kHz is only empty bit stuffing so there’s nothing added to the music apart from digital artifacts that may make it sound different. It might look good on paper, but you hear with your ears, not your eyes! 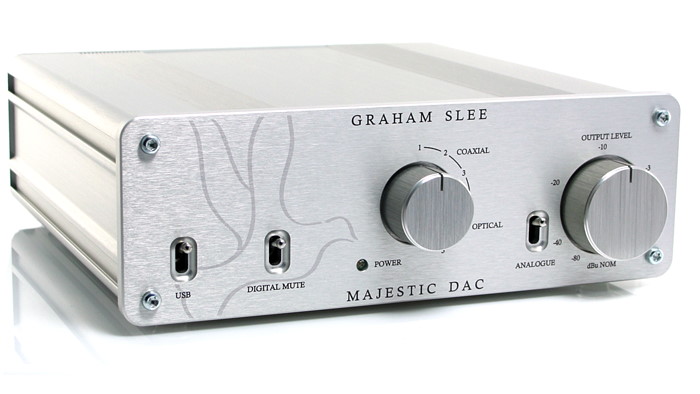 What really sets the Majestic apart from similar pre-DACs is the lack of harshness in its sound.

It’s what makes it sound so naturally musical: Its digital chipset is run 2dB below full-scale to prevent the harsh sound of “clipping”; and its analogue filters work differently to other DACs.

1. their inherently fast slew-rate captures every part of the musical waveform
2. their inverting* topology does away with common-mode distortion
3. the filters operate balanced to complement the DAC chip balanced output, cancelling noise
4. they use our ultra-linear technique which gives true 180 degree local negative feedback at the most sensitive hearing frequencies
5. the filters won’t “saturate” and distort on the loudest passages

This means you don’t get harmonic artefacts – alien noises – embedded in your music.

Those noises are the very thing that makes digital music sound so-digital and unatural. And is why you should compare how a DAC sounds with real music…

Direct comparisons between the Majestic and others reveals that something is missing – with the Majestic you don’t get the harsh sounding artefacts!

* absolute phase is maintained by phase inverting in the balanced filters