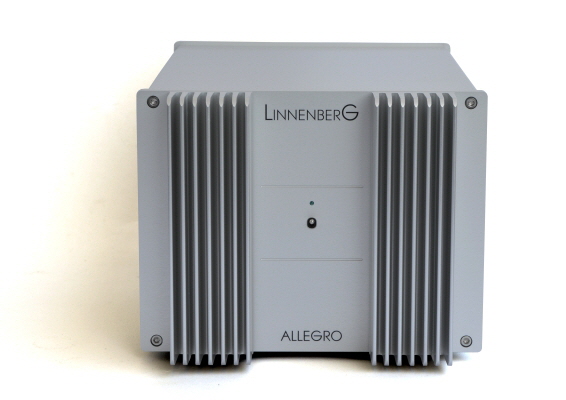 ALLEGRO delivers the superiority and authority of a linear class AB amplifier – even in demanding applications. It features high current capability and operating speed not to be found in IC-amplifiers aka “gain-clone” or any class D design. Clever construction techniques enabled us to build an amplifier with high packing density, consequently making the signal and power paths extremely short. So, don’t be fooled by the tender look – it is part of the concept to get big sound. In fact, creating circuits with unrivalled speed and response time is amongst other things a matter of physical closeness of electronic parts. The higher the frequency, the more it is important to reduce every millimeter of board trace.

It is the fast transient ability and ultra wide band (1MHz unfiltered) approach that let you hear the room, the ambience of the sound recording. Matching phase coherent speakers assumed, a pair of ALLEGRO amplifiers will deliver a perfectly executed soundstage. Furthermore, our concept has an order of magnitude lower distortion than competitors in the market. Distortion masks the integrity of the music, because it adds spectral components which weren’t there previously.

Lateral MOSFET output stage
The transistor originally developed by Hitachi in 1977 is probably the only semiconductor power device solely made for audio use. Famous for its tube like characteristic and perfect bias stability under any load conditions, the ALLEGRO uses just a single pair of tandem devices in the output stage in the so called “common source” arrangement.

Balanced signal path
Almost any LINNENBERG (past / future) product features true balanced circuits and connectivity. Historically, this may have a reason in our roots lying in professional audio. ALLEGRO is no exception: here, the circuit composes of a very low noise instrumentation amplifier such as used in high-precision measuring equipment. This approach ensures perfectly matched input conditions for the positive and negative signals and thereby allows the realization of high-performance balanced signal transmission.

Ultra wide band design
The high quiescent current design of all preamp and driver stages enables a core speed close to 1MHz, slowed down only by input and output filtering to match real word requirements. With filters in place, the small signal as well as full power bandwidth (!) measures an impressive 350 kHz. The lower frequency limit is around 0.3 Hz. No coupling capacitors are used throughout.

Inherently low noise
High resolution audio is intrinsically tied to low noise and distortion. System noise is the lower resolution limit of any analog systems, because it determines the smallest signal not masked by a noise floor. Hence, low noise levels are desirable. A-weighted output noise measures 25μV for the ALLEGRO giving a SNR of 120dB or an equivalent to 20 bit. 20 to 21 bits analog resolution is the realistic limit, restricted by the laws of physics (e.g., thermal white resistor noise)

Miscellaneous
The power supply consists of a 230VA toroidal mains transformer and a total of 60.000μF energy storage capacitors, enabling a stable output of 55W/90W at 8Ω/4Ω. Precision regulated supply voltages for preamp and driver stages. Microprocessor controlled – non intrusive protection circuits against over current, DC-offset or over temperature. 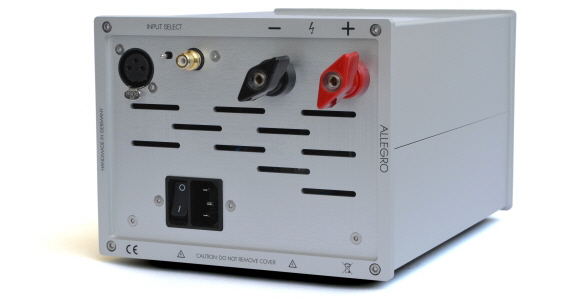